How It All Began

Hugh Egizi established Hugh’s Clock Shop in 1971, and Mark has continued with that name following the retirement of his father. Hugh Egizi immigrated to America from Italy at the age of 4 with his mother and four siblings. 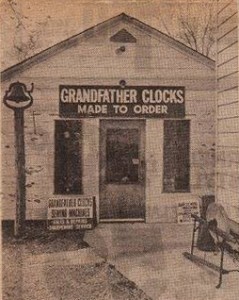 Hugh was a retired district manager for Singer Sewing Machines. He moved his family to Turnersville, New Jersey to build a funeral home for his son Gary Egizi. When Gary wanted a Grandfather’s Clock for his funeral home but did not have the money to buy one, he decided to build one from scratch.  So, Hugh and Gary built one from a kit. Already having a sewing machine repair shop in a converted garage on the side of his home, Hugh decided to build clocks and sell them from his store. This proved to be successful and profitable. Hugh made approximately 95 clocks which were all signed and numbered. He also taught clockmaking at the Washington Township Adult School. Students learned to make a clock from a kit, as he once did, and  taught them to make minor repairs and adjustments to clock movements. In 1978, the current clock shop was built in Turnersville.

As the business was growing, Hugh’s son, Mark, joined his father in the store. Mark acquired his father’s self-taught skill, but later went to Bowman Technical School for Watch & Clockmaking in Lancaster, Pennsylvania and learned the professional skills of clockmaking. Mark continued to develop his skills in clockmaking and completed the necessary requirements, pass the exam and became a certified Master Clockmaker by the American Watch and Clockmaker’s Institute (AWCI).

Unfortunately in 1987, Hugh Egizi passed away. Mark had already established himself as a leader in the field of horology and continued to expand and grow his clock business, selling and repairing all types of clocks. As the business grew, Mark added additional staff and clockmakers as well as acting on the recommendation of one of his employees, he decided to open a second location in Haddonfield, New Jersey in 1993 .

Today, Hugh’s Clock Shop continues to thrive on it’s reputation for expert, professional clock sales and repairs. Our knowledgeable clockmakers and courteous staff are always available to help you with your time keeping questions and concerns.  We welcome you to contact us by phone or email, or better yet, visit our clock shops – “Where we always have time for you.” 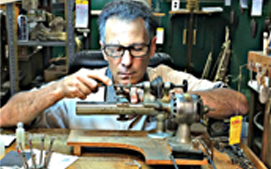